WOULD YOU EXCHANGE ONE NIGHT OF GOING OUT TO A NICE DINNER TO HAVE YOUR CHILD BEHAVE BETTER?

You probably already have – by not going out when you needed to because you didn’t want to hear the complaint stories from the babysitter when you got home. This is the lost parenting handbook you’ve been looking for! 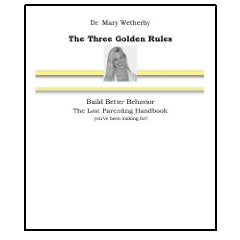 Do you ever have problems with

Sometimes everyone in the house tries to avoid the child’s anger by “walking on eggshells”.  You lose your temper, then feel guilty.

You are not enjoying your child like you want.

Dr. Wetherby gives two hours of material on two DVD’s, presenting her plan to real parents, with real kids, with real problems.  Instead of going out to eat, buy the DVD set, order in,  get the kids to bed, and sit down and relax and watch the DVD’s.  It’ll be the best night of your life with kids, because you know it’ll start leading to a better life for everyone.

The Three Golden Rules shows a new overall strategy for parenting and managing behaviors. Dr. Wetherby also describes multiple tools parents can use for helping these strategies work. She believes that when you work with children, you had better have many tools ready in your toolbelt! The magic of this program is that it works not only for everyday parenting questions, but also for the child that has serious behavioral problems.

Why should I listen to Dr. Wetherby’s advice ?

Dr. Mary Wetherby first started working with disabled children the summer after her 6th grade year at the Daytona Beach Easter Seal’s Center. She developed Juvenile Rheumatoid Arthritis the next year in the 7th grade. Dr. Wetherby feels a special kinship to children with all types of problems. Though physically challenging, she received her Ph.D. in Psychology with a specialization in Neuropsychology. In addition to working with children in her practice, Dr. Wetherby was a foster parent for several years for children with emotional, behavioral, developmental, and learning problems. She soon discovered that being exhausted after a day at the office, she needed a behavior plan that was not only easy to implement, but could also work with several differently aged children with different needs at the same time. A plan like this did not exist, so Dr. Wetherby developed one! The wonderful outcome was that the behavior plan she created also worked as a great parenting tool for children without special behavior problems – just the good old fashioned kid ones. Parent after parent in Dr. Wetherby’s practice has been amazed by the immediate success with behavior improvement of their children by using her plan – The Three Golden Rules.

“This is just a phase my kid is going through.”

Many times people feel that children will “grow out of” behavior problems. In Dr. Wetherby’s experience, these problems do not get better as children reach teen years, but instead often get worse! This is the reason that it is so important to use a behavior plan with children as soon as possible, especially those who seem at risk, “hard headed”, “difficult”, “obstinant”, or “hyper”. If a child has a diagnosed problem such as Attention Deficit Hyperactivity Disorder (ADHD), Autism, Asperger’s, Oppositional Defiant Disorder (ODD), Anxiety, Depression, Obsessive Compulsive Disorder (OCD), Tourette’s Disorder, developmental delays, or even frustration over school, managing that child’s behavior can be an issue. As soon as a behavior plan is in place, the better!

“I can’t imagine what this must cost!”

Actually it is less than most individual therapy sessions with a doctor.   And you can watch it again and again! You can order my DVD on Amazon for $149.00.