Has My Child Been Bullied? 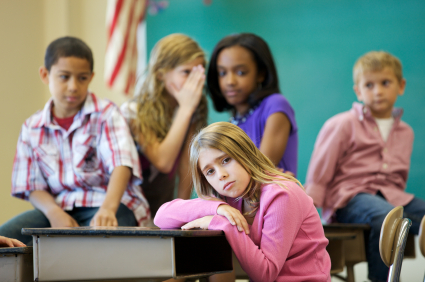 Bullying Can Be Hard to Identify

There is recent news about an elementary school child who killed herself.  Bullying is being linked to this tragedy.  The child reportedly tried to tell the teacher, but was encouraged not to tattle.  The mother related on the Today Show that the child asked to be home schooled but was told no.  In general, bullying can be difficult to identify and often missed because often the victims will make a brief complaint, but not outwardly state that he or she is being “bullied”.  Lots of kids “tattle” and lots of kids ask to be home schooled.  This does not mean that he or she is being bullied.   Thus, these signs are often harder to pinpoint as a sign of bullying.

Unfortunately,  passive bullying can be so much more difficult to spot in a child than active bullying.  If a child is being hit or beaten at school, it is much more obvious and easier to identify.  If other kids are rolling their eyes at a particular child, excluding her, talking about her in a separate group while obviously glancing over at the child, and/or not clapping for her but clapping for everyone else, passive bullying is present, but ever so damaging.  What is the victim to say about this to an adult?  That another child is rolling her eyes at her?  This may be quickly dismissed as tattling, but should not be.
Bullying is getting much media attention right now, and often when a topic is receiving this much attention, people tend to eventually feel the issue is overblown.  Bullying is a significant issue, and is possibly more prevalent than is reported, possibly because children often do not realize they are being “bullied”.  They know that they are miserable and feel isolated.  Children often do not know how to articulate these feelings.

How to Get Information from your Child About Bullying

Ask questions about everything your child tells you – the small, the big, the good, and the bad.  Don’t take “I don’t want to talk about it” as an answer.  If you are communicating regularly with your child about positive things, the difficult subjects will sometimes be discussed more easily.   Try not to ask general questions.  The more direct, the better.  Ask open ended questions.  If you ask a closed ended question, you will get a short answer.  Asking “How was your day?” gets a response of “Good”, which does not necessarily mean that your child’s day was “good”.  Ask details. Try asking specific questions, such as:
One reporter stated that bullying usually occurs in high school but not elementary school.  This could not be further from the truth.  In my experience, elementary and middle school bullying is prevalent.  Watch for the signs.  Your child may give you one brief mention of an issue.  Because he or she does not elaborate, this does not mean that the feeling behind the statement is not significant.