Favorite quote from a sign in Boulder Canyon:  “In case of flood climb to safety”.  This seems odd because it seems so obvious. The point being, however, is that people tend to want to stay in bad situations because the change to possible safety is so unknown- and we humans aren’t usually big fans of the unknown. 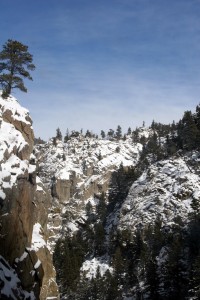 This not only happens for flooding, but also changes in everything from career to marriage to eating disorders.  People in abusive relationships stay in them even though they are “drowning”.  They don’t move to higher ground and leave the relationship simply because they have never been to the higher ground before.  Similarly, sometimes people from dysfunctional families are so accustomed to trying to rescue their family (who won’t change their behavior) that they don’t realize that they themselves are drowning (with an eating disorder, depression, etc). If you are a “rescuer”, it’s often difficult to come to terms with the fact that you simply can’t save those who don’t want to be saved.  Next time you have to make an intimidating change, think to yourself, “in case of flood climb to safety”.  The climb may be scary, but worth it.